This project aims to foster human resources who can contribute to the achievement of the “Sustainable Development Goals (SDGs)” in the Central Asian region* and to the resolution of issues in the region through cooperation and collaboration among the Nippon Foundation, the Japan Central Asia Friendship Association (JACAFA), and University of Tsukuba. 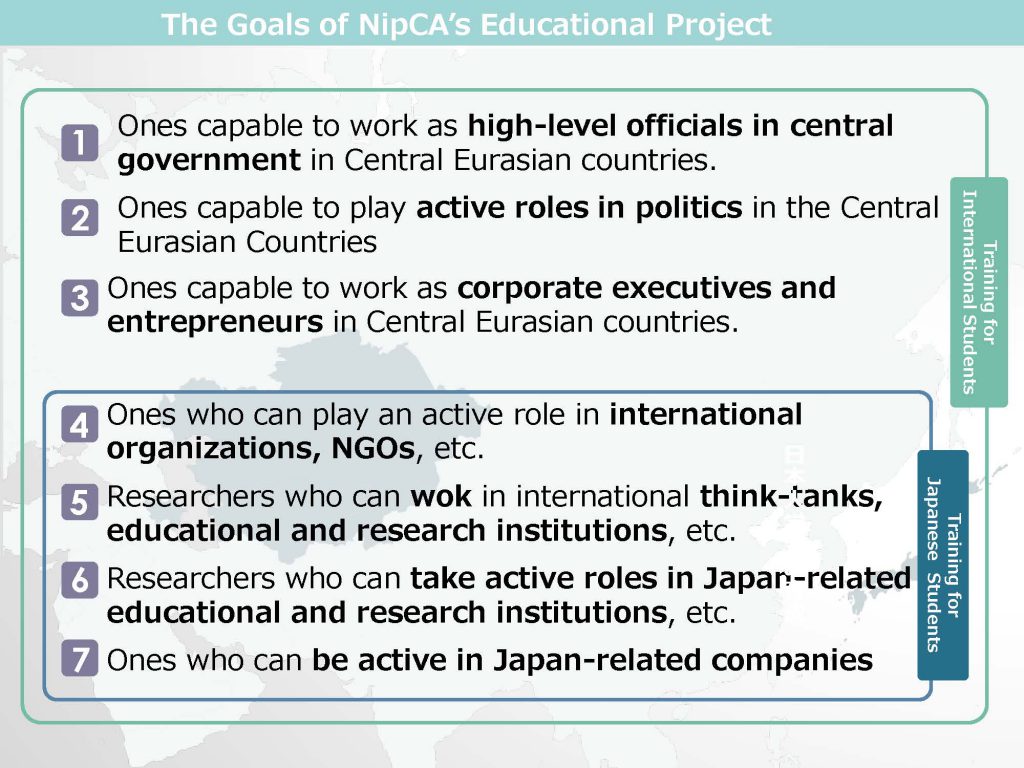 Background of the project

JACAFA, with the support of the Nippon Foundation, has been providing scholarships to more than 300 excellent students from six countries in Central Asia to study abroad in Turkey since 2004. Since 2016, they have suspended the scholarship business, promoted our project mainly through the activities of the alumni network, and are actively promoting new exchange projects with Japan.

By starting this grant project, we aim to create a large human resources network that connects the region and Japan by creating a new group of human resources who will play a role in the development and prosperity of the Central Asia region in the future, while combining the network, know-how, and activity base of each of the three.

The project will focus on three main activities: (1) Network collaboration activities of the Nippon Foundation, JACAFA, and University of Tsukuba, (2) education and research activities, and (3) foundation building activities.

(1) Network collaboration activities of the Nippon Foundation, JACAFA, and University of Tsukuba

We aim to develop human resources through two-way education and research exchanges in Central Asia and Japan. Specifically, internship programs at Japanese companies and NPOs for international students, and short-term dispatch programs to Central Asia for Japanese students will be conducted. In addition, excellent students enrolled in the master’s program of our university will be awarded a scholarship as a “Nippon Foundation Central Asia Fellowship”.

In addition to strengthening the domestic and international networks related to Central Asia, we aim to return educational and research results to Japanese society and the world through public symposiums and other events.

General Inquiries on the NipCA Project