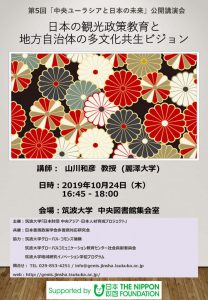 On October 24, 2019, Thursday, we invited Prof. Kazuhiko Yamakawa from Reitaku University , who is also University of Tsukuba graduate, to University of Tsukuba to give a lecture titled “Japan’s Tourism policy education and local government’s multicultural symbiosis vision” as the fifth “Central Eurasia and Japan’s future” public lecture.
The lecture by Prof. Yamakawa, who is also the chairman of the Japanese Association for Language Policy, was regarding to the current situation and problems in tourism in Japan, based on the case of Niseko in Hokkaido and Ishigaki Island in Okinawa. Prof. Yamakawa, who stated “Tourism is ‘a field’ “, also pointed out that although the number of tourists from other countries has significantly increased, the barrier between tourists and local people has come to be a new problem. While it tends to focus on language education in the tourism education, we understood Japanese society has faced the Overtourism problem which is the result that the local people do not prefer the internationalization promoted by creating the environment for tourists from other countries. It was a lecture that let us think about the future of the tourism policy in Japan. 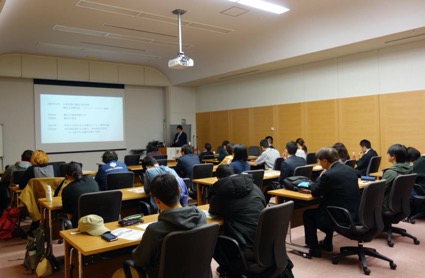