On Friday, February 22, 2021, the 19th public lecture series “Central Eurasia and the Future of Japan” was held. This time, we invited Dr. Vanbaelen Ruth, Associate Professor of Humanities and Social Sciences at University of Tsukuba, to give a lecture titled “Multiculturalism and Immigration Issues in Belgium”. 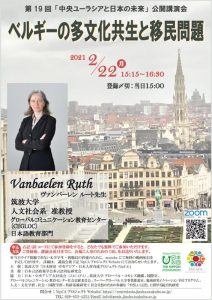 After her first visit to Japan in 1991, she graduated a university in her home country and came to University of Tsukuba as a Non-degree Research Student (Kenkyusei) in 1994. Upon obtaining her degree, she worked as a Research Fellow of the Japan Society for the Promotion of Science, then she was involved in English education at Nihon University. She has been teaching Japanese at University of Tsukuba since 2016. This time, she talked about the immigration policy in Belgium.

Belgium, which is located in the middle of Europe and was dominated by various countries, has three official languages, Dutch, French, and German, each with a federal system with a community government. From about a century ago, new people came in intermittently as immigrants and refugees, and Belgium became a multicultural society with diverse languages and cultures. In such a society, sometimes measures are taken for immigrants to become more deeply able to blend into and become active members of society. Of course, Belgium is not an exception, and various measures are taken by public institutions and private organizations. As a public institution in the Dutch-speaking world, the Civic Affairs Bureau provides a variety of social studies and level-specific Dutch language classes to make immigrants active citizens in the society. On the other hand, in private services, for example, “soccer moms”, which are mothers practicing Dutch while children are practicing sports, are available. This contributes to the education of Muslim women who cannot interact with men other than their families. Although public services can only provide a centralized service for various reasons such as budget and human resources, we feel that this combination of public services and private services is one of the leading cases which makes it easier to approach those who are difficult to reach. After the lecture, it was time for a lively question and answer session, and it was a lecture full of great hints about the future for Japanese society, which is still immature as an immigrant society.