On Friday, February 4, 2022, the third online screening of Russian and Central Asian films was held. This film screening presented “The Whaler Boy” (2020), the first feature film by Russian director Philipp Yuryev. Its shooting took over seven years in the fishing village of Chukotka in the easternmost part of Eurasia. After the previous two screenings, more than 500 people registered for this event, exceeding the capacity. Most participants have continued to attend online screenings since the first event of this kind held by the NipCA project. This screening has been recognized as an established event among those interested in Russia, Central Asia, and cinematography itself.

Yuji Kajiyama, an international administrator and coordinator of the NipCA project, gave a pre-screening commentary titled “Poverty, Disparity, and Border Issues in the Images of Polar Regions of Central Eurasia.” He began with an introduction to Kamchatka, a region linguistically and culturally close to Chukchi and just 86 kilometers far from North America, while showing images of the map in the film “The Whaler Boy.” There was an emphasis on explaining the peculiarities of the geography, such as the positional relationship of the territory and the Diomede Islands consisting of Russian and American territories located in the center of the International Date Line, which is essential for understanding the movie. Moreover, Chukotka is thickly covered with tundra and isolated from the rest of the world, and the sense of alienation in such land greatly impacted the local population.

Most viewers had never seen images of Chukotka before. From the questionnaires after the screening, many of them commented that they were shocked to see the harsh natural environment, the lack of freedom of travel, the daily power outages, and the lack of infrastructure even though the US is just a stone’s throw away. The film is also an acting debut of Vladimir Onokhov, a Chukchi actor playing the main character Leshka. He received many positive reviews for his performance and character. Viewers also commented that his enthusiasm struck them for learning a foreign language despite the comical depiction of his struggles to study English.

“The Whaler Boy” is the first Russian film screened at the Russian and Central Asian Film Festival. Even though “The Whaler Boy” is a Russian film set in Chukotka, it is diverse art with original audio, including Russian and Chukchi. To introduce and familiarize people with the various worlds of Russia and Central Asia through cinematography, we will continue to hold screenings in the future. We look forward to having you join these events. 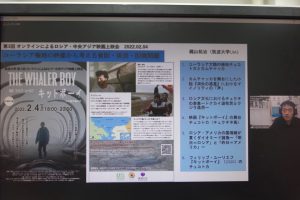