On Tuesday, December 22, 2020, Al-Farabi Kazakh National University (KNU)’s University of Tsukuba (UT) Office opening ceremony was held. KNU is one of the eleven Campus-in-Campus (CiC) partner universities with which the UT is working to realize trans-border educational and research exchanges that transcend national borders and institutional boundaries. This time, as CiC partner university, KNU opened an office in UT. 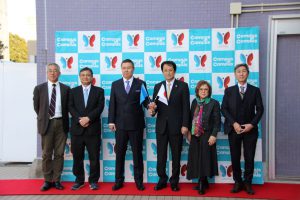 The ceremony consisted of two parts, and in the first half of Part One held at Student Commons, under the supervision of Dr. Toshinobu Usuyama (Professor of Faculty of Humanities and Social Sciences) who is responsible for the NipCA project, UT President Dr. Nagata first thanked the participants and related parties, and expressed the joy of opening the office in UT and the expectations for the future. Next, Ambassador Plenipotentiary H.E. Mr. Baudarbek-Kozhatayev then gave a speech expressing His expectations for further friendly relations between KNU and UT, as well as between Kazakhstan and Japan. Later, KNU President Mr. Mutanov Galimkair Mutanovich, who was unable to visit UT due to the corona disaster, expressed his determination to build a stronger partnership with UT. In the second half of Part One, the location was moved to the front of Al-Farabi Kazakh National University’s UT office entrance, where the Ambassador and President Dr. Nagata cut tapes and exchanged commemorative gifts. 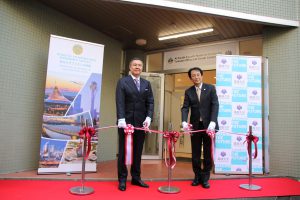 Part Two was held again at Student Commons, and an online lecture by Professor Aliya Massalimova of KNU was held. The lecture was about The Great Philosopher of Medieval Islam, Al-Farabi (870-950), which the the Al-Farabi Kazakh National University was named after, and gave us a detailed description of how this person, who is said to have been born in Kazakhstan and also was adopted his portrait in the banknotes, has made great achievements. Al-Farabi, known as the “Second Master” in the sense of being the second greatest teacher after Aristotle, is well known in Aristotelian studies. Finally, the Vice President of KNU sent acknowledgements to the related parties, and the ceremony ended successfully. 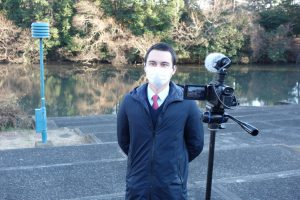 As NipCA project, we will continue to work together with the Republic of Kazakhstan to further develop academic and educational relationships.