On December 14, 2020, the 17th of the public lecture series “Central Eurasia and the Future of Japan” invited Dr. Masami Yamashita, part-time lecturer of Open University of Japan and Senzoku Gakuen College of Music, and a cooperative researcher of Sophia University to give a lecture titled “Folk Instrument Production in Tuva, South Siberia.” 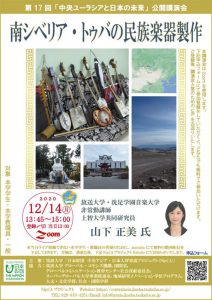 Dr. Yamashita has been specializing in Turku ethnological music, and this time she talked about the music of the Tuba people, the core ethnic group that makes up the Tuba Republic in the Russian Federation, and the musical instruments used there, and the current state of musical instrument production. In the lecture, she introduced the Tuva people, a nomadic tribe that received Tibetan Buddhism through Mongolia, and explained about stringed instruments such as Igir and throat singing, as well as the folk instrument makers who support Tuva music. In the middle of the lecture, there was a moment to watch a performance by the famous Tuvan music group “Funfurtu”, where the audience was mesmerized by the Igil tune that traced the neighing of horses and the magical throat singing that was like the wind blowing over the vast steppe area. 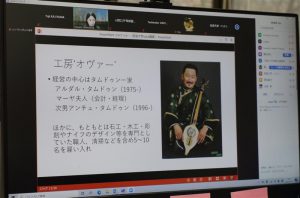 At the center of the lecture was an explanation of the two people who lead the production of Igil, which is indispensable for Tuva music. On the one hand, there is the maker who can be said to have set the standard for today’s Igil, while utilizing modern technology, and on the other hand, there is the maker who creates instruments using only the workings of nature. The lecture contrasted the differences between the two in an easy-to-understand manner and approached the essence of Igil through his talk. During the Q&A session after the lecture, there were many questions from the audience, including one on the discrepancy between folklore music and art music and the nature of ethnic identity, and another on the nature of school music education against the background of the growing Tuvan music scene, each of which was answered in detail by Dr. Yamashita.

This lecture scene was broadcast on Manaba until December 31.