On Monday, August 24 , 2020, as the twelfth meeting of the public lecture series “Central Eurasia and Japan’s future”, we invited Mr. Maxim Klykov, who presides over Russian folk music class “Maxim”, to give a lecture titled “Balalaika – The Musical Instrument of Russia as a cultural identity”. 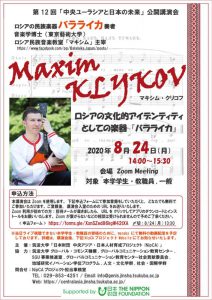 In 2003 Mr. Klykov graduated the St. Petersburg National Cultural Art University with the command of the orchestra of the Russian Folk musical instrument and the Major of Balalaika. While enrollment, as a member of the Russian folk music ensemble, he performed not only in Russia but also in Europe. He then came to Japan in 2004 to begin his research on traditional Japanese music at Tokyo University of the Arts. In 2005, he won the Excellence Award in Balalaika in the International Student Music competition in Japan. In 2011 he acquired a doctoral degree in Music and Culture at Tokyo University of the Arts. At the same year he established “Garmosika”, a folk music ensemble, and he has been playing solo and ensemble, mainly in Japan.

In this lecture, he not only talked about the origin and the history of Balalaika, and the difference between ethnic Balalaika and art Balalaika, he also gave music introduction by playing. It was a great excitement while being an online event. The listeners exceeded 80 participants, and in Q & A session after the lecture, Mr. Klykov politely answered the simple questions of the person who listened the Balalaika performance for the first time, to the specialist questions by music researchers.

This lecture scene was broadcast on Manaba from August 19 to August 31. 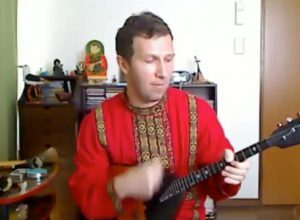