On February 25, 2020, as the 10th part of the public lecture series “The Future of Central Eurasia and Japan, a delegation from L.N. Gumilyov Eurasian National University (ENU) delivered lectures in Russian: “Scientific Integration Between Universities of Kazakhstan and Japan”, “Archaeology of the Great Steppes”, at the Central Library of the University of Tsukuba.

The Dean of the Faculty of History (ENU), Professor Tlegen Sadykov gave a talk on international university cooperation strategies employed in Kazakh universities using the example of Eurasian National University. Professor Sadykov noted that establishing and strengthening cooperation with Japanese universities is one of the main priorities for ENU. In fact, the university conducts regular student exchanges with the University of Tsukuba.

Professor Sadykov was followed by the Head of the Department of Archeology and Ethnology (ENU), Professor Ulan Umitkaliev, who shared his report titled “Archeology of the Great Steppe”. He spoke about Kazakhstan’s ancient history and discussed various findings of several expeditions carried out on the territory of modern Kazakhstan, including those conducted by him. Professor Umitkaliev noted that the history of Kazakhstan is closely associated with metallurgy and horse breeding. Historical evidence shows that the local population has already bred horses in the Eneolithic era. The audience learned that the Bronze Age in the region was characterized by open-pit copper and tin mining, and the late Bronze Age marked the beginning of fuel production. The early Iron Age was characterized by wars over land and livestock, later followed by the Hunno-Sarmatian period and the Turkic period.

Professor Umitkaliev showed many photographs of various archaeological finds. One of the most important ones for the history of Kazakhstan is the so-called “golden man”. These are the remains of an ancient warrior of the Saka tribe wearing rich vestments. As of now, 8 such “golden people” have been found. Miniature gold jewelry also represents an interesting find since manufacturing those would require very advanced technologies. Another curious find is 13 perfectly preserved bodies of sacrificial horses in the Berel kurgans. All horses were red, which symbolized the sun and fire. It was believed that a red horse can take a person’s spirit to another world. This serves as evidence that ancient people believed in the continuation of life after death. Another mystery is human remains with traces of craniotomy. It is unknown whether it was performed during life or after death. Professor Umitkaliev brought some of the remains he found during his expeditions to University of Tsukuba to be examined in a local laboratory. 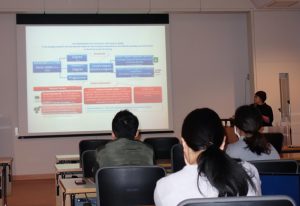 After the guest speakers finished their talks, it was time for questions from the audience: about the mentioned remains, the Kazakh traditional drink “kumis”, the credit counting system in Kazakh universities.

As the final part of the visit, Professor Sadykov invited Japanese academics and students to come to ENU and study the history of Kazakhstan. He kindly presented souvenirs with the logo of ENU and Kazakh national symbols, expressing his hope for the cooperation between Kazakh and Japanese universities to continue in the future. Professor Toshinobu Usuyama of the University of Tsukuba thanked the invited guest speakers for the interesting lectures they had delivered and shared the expressed sentiment regarding the continuation of fruitful cooperation between ENU and University of Tsukuba.