On February 18, 2020, as the 9th part of the public lecture series “The Future of Central Eurasia and Japan,” two scholars from Al-Farabi Kazakh National University delivered lectures in English on modern Kazakh Culture at the Central Library of the University of Tsukuba.

First, Dr. Aliya Massalimova gave a presentation on the Faculty of Philosophy and Political Science of Al-Farabi Kazakh National University. The faculty traces its history to the creation of the Department of Psychology and Logic in 1947. Presently, there are 6 big departments, 1691 students and 40 foreign students. The faculty offers various programs, including double degree programs with leading foreign universities. Dr. Massalimova expressed the hope to create a new educational program together with the University of Tsukuba.

Next, Dr. Massalimova presented a joint research project, “The Role of Symbols in the Modernization of Public Consciousness”. The project is focused on the current culture of Kazakhstan. In the context of globalization, the question of transformation and reinterpretation of values arises, and Kazakh people are forced to adapt to the new circumstances. The aim of the project is to find out in which ways they are transforming their identity and which values they ought to keep. One of the questions is which symbols can become the basis of spiritual and cultural integration.

The presentation of the research project on symbols was continued with Ms. Nazym Baskynbayeva’s lecture, “Symbolical Phenomena in the Process of Modernization”. Ms. Baskynbayeva, who is a PhD student at Kazakh National University, introduced one of the symbols of Kazakh people – the national ornaments – and explained how they can be used in modern life when making or decorating various objects. Clothes, furniture, logos, souvenirs, jewelry, tableware, pastries – all of these can be created using national ornaments. The ornaments can also be found in architecture, floristics, and numismatics. They are also present in the design of the National Flag and the National Emblem of Kazakhstan, and on coats of arms of various Kazakh cities. 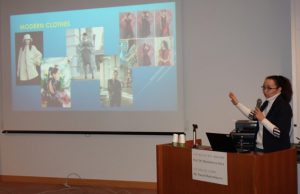 In her next presentation, “The Image of a Modern Kazakh Woman: Culture, Traditions and Social Status”, Ms. Baskynbayeva explained how the role of Kazakh women has transformed over the course of history: starting before the revolution of 1917, throughout the Soviet era and to the period of independence. She pointed out three types of female image in modern Kazakhstan: the traditional woman, the “Western” woman (further subdivided into a self-made woman and a “Barbie doll”) and the Islamic woman. Traditional women are mostly those who live in patriarchal families in the countryside. They wear modest traditional clothing and are either housewives or employed in traditionally female jobs: teachers, medical workers or cashiers. The “Western” women can be found in urban areas and democratic families, or in the Millennial age group. The Western self-made women are educated, often multilingual, financially independent, ambitious, and always in shape. The Western “Barbie dolls” are mostly concerned with their appearance and actively use social networking. The Islamic women are found in religious families and among the graduates of Arab universities. They wear hijabs, burqas or abayas, are limited in their occupational choice and social interactions, and are completely dependent on their husbands. What unites all these women is their respect for family values and Kazakh traditions, and their heavy use of social networking and news websites. Ms. Baskynbayeva hopes to find more common characteristics between them with the aim of preserving the national identity of modern Kazakh women.