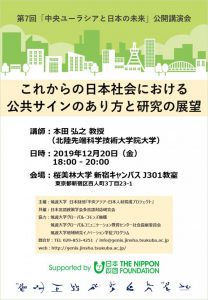 On December 20, 2019, Friday, Prof. Honda Hiroyuki who is a professor of Japan Advanced Institute of Science and Technology gave a lecture “The future of Public signs and its research in Japanese society “. In his view, providing the Public signs is necessary for foreign people to move more freely as the number of not only foreign tourists but also foreign residences has been increased in Japan. He also explained that the importance of pictogram utilization for those who do not understand Japanese, the limitations that we cannot deal with it in four standard languages, Japanese, English, Chinese and Korean, any longer and the limitations of multilingual sign. It was pointed out that there are more useless public signs in Japan, comparing with Europe and that a half of foreign people cannot read the alphabets that are used for the notation of proper noun in Japanese. He also suggested the use of the pictogram for the notation of the restroom, instead of the characters, the use of a Kana notation with a supplementary alphabet notation for the place and facility names. We could take a lot away from this lecture. 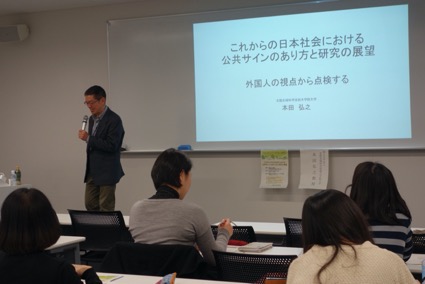