The 32nd Public Lecture of “The Future of Central Eurasia and Japan” Series was held on October 18, 2021. This time, we invited Dr. Takuya Soma, associate professor at the Hakubi Center of the Kyoto University, to give a lecture titled “In Search of the Origins of the Secret Art of Cavalry Eagle Hunting Culture on the Silk Road: A Story of Encounters and Farewells between Golden Eagles and Kazakh Eagle Hunters.”
This time, as a geographer, he talked about the culture of mounted falconry among the Kazakh people in Western Mongolia, where he had conducted fieldwork for two years.
Dr. Soma spent two years conducting field research on Kazakh nomads and eagle hunters in the village of Sagsai in Bayan-Ölgii Province, a region with a sizeable Kazakh population located on the western edge of Mongolia and bordering Russia and China.
In this lecture, he talked about the “meeting and parting” between humans and golden eagles often bred for mounted falconry and how they relate to each other. The golden eagles used for falconry are not bred until they die, but instead, hunters catch eaglets in their nests and accustom them to humans. After about five years of hunting, when golden eagles are ready for reproduction, they are released into the wild. Once the golden eagles are caught, hunters train them through various procedures such as balancing to stay on their arms, feeding to keep them healthy, and wearing blindfolded hats to prevent them from attacking livestock and children before the winter hunting season starts. Golden eagles are very voracious eaters, so about 250 kilograms of food must be prepared annually.
Although mounted falconry is a laborious and costly activity, the falconry fox fur is used to make traditional costumes, beautiful and ornate tools are made for falconry, and a sense of reverence and sanctity toward the golden eagle is fostered. It is an irreplaceable culture that forms the core of the Kazakh people’s relationship with nature. However, there are few problems. Recently, the number of people who own golden eagles for the festival has increased. There is a concern that the Kazakh falconry culture will not survive if the falconry culture becomes a demonstration and the cultivated so far view of worshipping nature declines.
During the Q&A session, listeners asked a wide range of questions, starting from the Mongolian and Kazakh falconry to the world falconry as a whole and questions about fieldwork from the students. 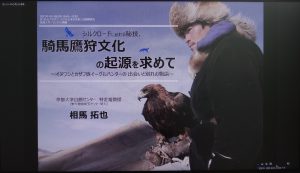