The 34th Public Lecture of “The Future of Central Eurasia and Japan” Series was held on June 13, 2022. This event featured a guest speaker Mr. Yoji SAKAKIBARA, deputy director of the Economic Development Department and senior fellow at the International Development Center who delivered a talk titled “Central Asia from a Tourism Perspective.”

Mr. SAKAKIBARA graduated from the International Cooperation Department of Kobe University and worked in the consulting industry. Currently, he works at the International Development Center, where he has been involved in projects in about 30 countries. Mr. SAKAKIBARA has just returned from a field study in Central Asia. In this public lecture series, he talked about the recent situation of each Central Asian country introducing economic indicators such as changes in GDP. By pointing out specific examples of tourist attractions and tourism policies, he gave us an overall picture of the tourism sector in the region. 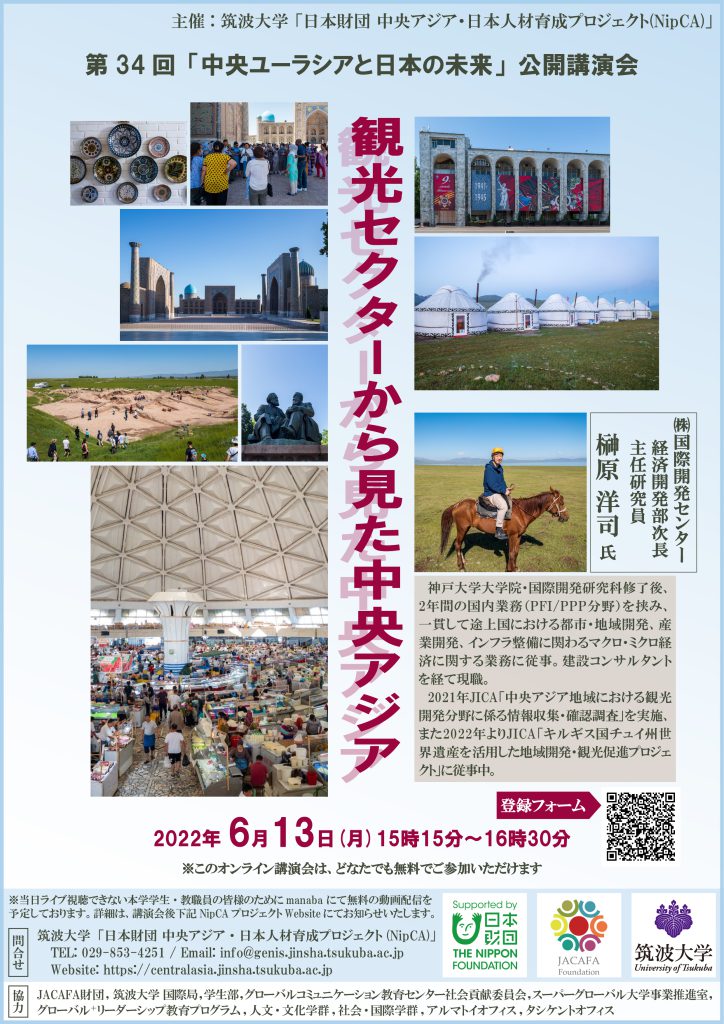 Uzbekistan, presented in detail at the very beginning of the lecture, no longer requires tourist visas from many countries as of 2018, and such policy resulted in an increasing number of tourists. On the other hand, the country faces problems related to the lack of hotels and high-speed train infrastructure. Mr. SAKAKIBARA also highlighted the role of located in Samarkand the “Silk Road” International University of Tourism and Cultural Heritage under the Ministry of Tourism of Uzbekistan. He stressed the importance of such a university in providing an advanced curriculum and training for tourism personnel across the country.

Next, the Kyrgyz Republic was introduced as a country rich in natural tourist attractions. A standard tourist itinerary to this country usually includes Uzbekistan’s historical sites and the Kyrgyz Republic’s bountiful nature. Lake Issyk-Kul, one of the most famous tourist attractions, has been known as a sanatorium since the days of the former Soviet Union. Mountains surround the lake to the north. New developments are taking place amid the COVID-19 pandemic, such as private companies buying up old sanatoriums to create co-working resorts. Mr. SAKAKIBARA also mentioned opportunities to enjoy horseback riding and hot springs on the south shore of the lake. He described the capital city – Bishkek- as an “old” and a “walkable city” compared to the capitals of neighboring countries that have been built up in recent years. Bishkek city is an area where visitors can enjoy the urban landscape of the former Soviet era.

Mr. SAKAKIBARA also introduced JICA’s Project for Regional Development and Tourism Promotion through the Utilization of World Heritage Sites in Chui Region in the Kyrgyz Republic he has worked for since this year. This project puts the use of historical resources first with a focus on the use of the following three World Heritage Sites:

 Ak-Beshim village, where a Japanese university has been involved in excavations.
 Burana Tower, a long-known popular tourist attraction.
 Krasnaya Rechka village, where a reclining Buddha was excavated during the former Soviet Union era.

After the lecture, participants asked a wide range of questions about tourism in the region, including the potential for tourism development in Central Asia, the problem of psychological distance from this region, and tourism training. There was a lively Q&A session, with many questions and comments continuing long after the scheduled end time, providing a valuable opportunity to hear Mr. SAKAKIBARA’s expert views on tourism in Central Asia. 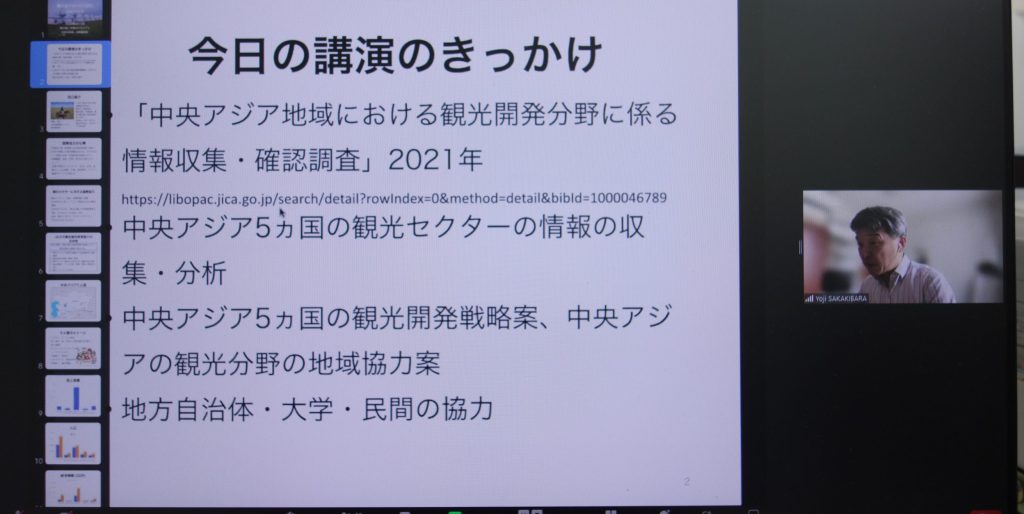