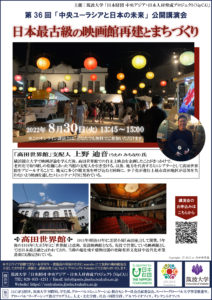 Takada World Hall was founded in 1911 as a playhouse named “Takadaza” in the Takada district of Joetsu City, Niigata Prefecture. 5 years later, in 1916, it was renamed “Takada Sekaikan” and became a cinema. The Takeda Sekaikan has operated continuously ever since, which makes it a cinema with a history of more than a century.

In the 2000s, the local community organized a movement to preserve Takada Sekaikan, which was in danger of being demolished due to aging issues. The movement led to the establishment of a non-profit organization in 2009, the primary purpose of which was to preserve the building of Takeda Sekaikan. Later, the Hall was repaired thanks to the cooperation and donations of citizens.

In 2014, Mr. Ueno became the manager of Takada Sekaikan. He was born in Joetsu City, where the Hall is located, and studied film criticism at Yokohama National University. After holding independent film screenings at Takada Sekaikan, which at that time,was still in danger of being demolished, he decided to become the Hall’s manager.

As the manager of Takada Sekaikan, Mr. Ueno has succeeded in attracting a large number of people by conveying the external charm that the building has retained since it opened. Since 2014, Takada Sekaikan has been hosting various events. In addition to movie screenings and cheer screenings, Takada World Hall also hosts community-related activities such as music events, stage greetings, marriage ceremonies, events related to currently broadcasted movies, etc. The administration also allows the usage of the cinema as a daycare center, a gathering place for New Year’s mochi-tsuki (rice cake pounding), and provides the Takada Seikakan as a venue for fairs. As one of Japan’s cultural assets, it also welcomes tourists.

Events like these have made the Takada Sekaikan a well-known destination, even among people who do not normally visit movie theaters. Thanks to an increase in film screenings and community-based activities, the Takada Seikakan, which had almost no visitors, had attracted 150,000 visitors in 2015 FY.

One of Mr. Ueno’s main goals was to revitalize the Takada district, which had an extremely low birth rate, by developing community service facilities and promoting urban development through movie theaters. Today, many tourists who visit Takada World Hall also visit other businesses in the area. Consequently, the number of new businesses contributing to urban development is increasing, and the revitalization of the area continues to progress. Undoubtedly, Takada World Hall is not just an ordinary cinema, but a platform for cultural dissemination and a driving force for the revitalization of the region.

However, the Hall has to contend with a number of problems that arise from such a special operation. These problems include personnel issues, operational planning, finances, etc.

In his lecture, Mr. Ueno talked about the above-mentioned community-based activities and problems from the perspective of cultural dissemination and regional promotion, their impact on urban development, and the prospects of implementing the current strategy outside of Takada District. According to Mr. Ueno, the events are also part of the management strategy to keep Takada Sekaikan alive, as it is difficult to operate a movie theater just by screening movies.

After the lecture, Mr. Ueno openly answered a variety of questions about the operation of the Hall, films that are best suited for the business, and aspects that must be considered when operating a movie theater. The lecture became a valuable opportunity for the participants to learn about such a unique form of urban development strategy and to have a discussion with the manager of the Takeda Sekaikan. 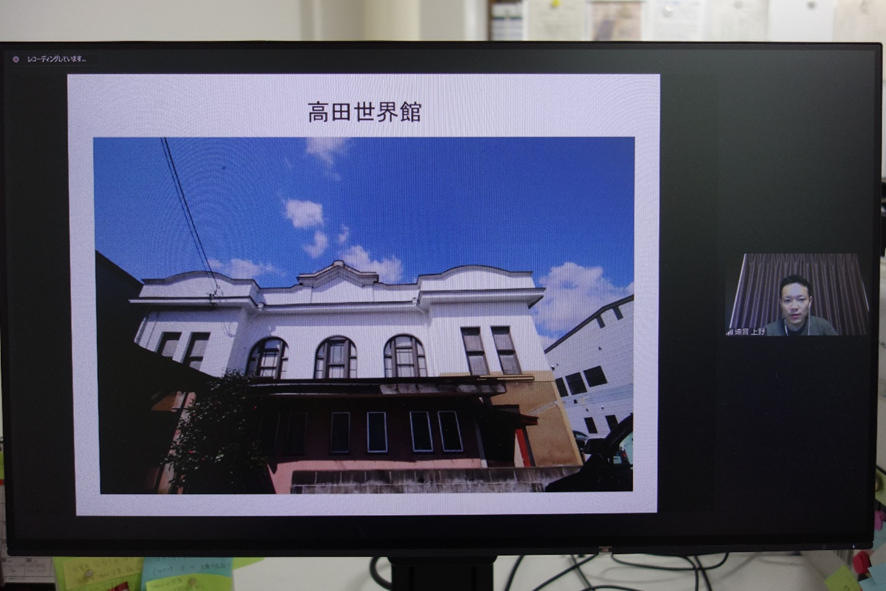