On November 16, 2020, as the 14th part of the public lecture series “The Future of Central Eurasia and Japan,” Tsukuba City Policy Innovation Director, Mr. Yusuke Mori was invited to give a lecture on “SDGs Future City Tsukuba’s Efforts – A City Where the World’s Tomorrow Can Be Seen”. 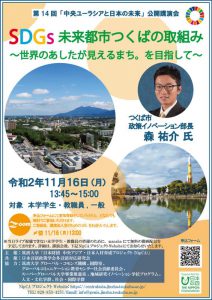 This lecture was hosted by the “Japan Foundation Central Asia-Japan Human Resource Development Project” (NipCA) of University of Tsukuba and co-organized with the multi-language study group of the Japan Language Policy Association.

Mr. Yusuke Mori introduced the unique initiatives of Tsukuba City, which has many researchers and foreign residents, along with a wide variety of slides, on issues such as the declining birthrate and aging population, and SDGs (sustainable development goals aimed at achieving by 2030). Tsukuba City aims to increase the working age population through the revitalization of the city center and surrounding urban areas. There was also a talk about business development to take advantage of the unique goodness of Tsukuba Science City. 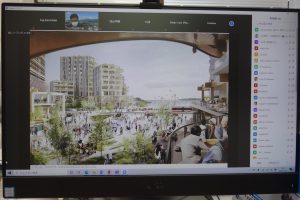 Tsukuba City has been selected as the only “SDGs Future City” in Ibaraki Prefecture, and Mr. Mori showed us the prospect of Tsukuba City continuing new initiatives in the future. This lecture, attracting more than 50 speakers, was a valuable opportunity to learn about Tsukuba’s policies for the future and was also very suggestive for the project.

This lecture scene was broadcast on Manaba from November 11 to 29.