On Friday, November 20, 2020, the 15th public lecture series “Central Eurasia and the Future of Japan” was held. This time, Mr. Hiroshi Okamoto, Education Specialist at the North Pacific Office of the International Children’s Fund (UNICEF), was invited to give a lecture entitled “Learning gained through international education support in 4 continents, 6 countries that I worked, and 36 countries.” 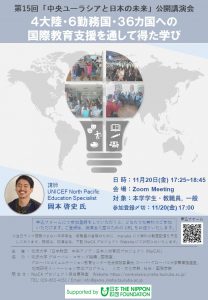 On the day, there were many citizens who wished to participate, and about 70 people joined the lecture. Mr. Okamoto, who is currently involved in educational support in three countries as an educational expert, has been involved in educational support in 36 countries, 4 continents, 6 countries that he worked, and 36 countries in the world as an educator, lifelong learner, and performer. In this lecture, he talked about his background, the circumstances that led him to proceed in the path of educational support, and his experiences in the field where he was actually involved in international support. He has prepared a story of six countries where he worked for this lecture, but in the actual lecture, he asked the listeners to vote using Zoom’s questionnaire function, and he talked about Mauritaria and Mongolia of their high interest. Many students and auditors were inspired by Mr. Okamoto’s very valuable story, who has been playing an active role at the forefront of development support, as he sees various international support activities as his own learning.

This lecture meeting made a new attempt to take advantage of Zoom’s survey and chat capabilities to proceed it in an interactive way with the listeners. According to a survey after the lecture, this participation type lecture was well received, and more than 80% of respondents said they would like to participate if there is a sequel to this lecture. The expectation for the sequel is high.

This lecture scene was broadcast on Manaba from November 20 to December 13. 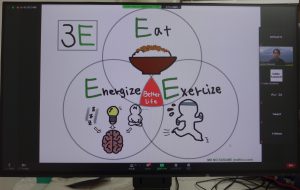