On 12 July 2019, a public lecture was held at the Student Commons for the purpose of introducing the Tatar language and culture, in which 21 students and faculty members of the university, as well as 4 participants from outside the university participated. The lecture was planned by a graduate student of this university who specializes in Tatar language, and came to be realized in the framework of serial public lectures “Future of Central Eurasia and Japan.” In the lecture, the rich and diverse Tatar world was introduced from various viewpoints such as Tatar cuisine, music, traditional dances, and the bonds between Japan and Tatar society. “Although it is not well known in Japan, the first Muslim immigrants to this country were Tatars who had fled the Russian Revolution. I want more people to know the connection between Japan and the Tatar world” – commented a graduate student Ms. Mizuki Sakurama-Nakamura, the lecturer of the seminar. Participants were surprised at the diversity of neighboring Russia, which is said to be a close but a far country, and also expressed interest in learning Tatar language. This lecture ended successfully. 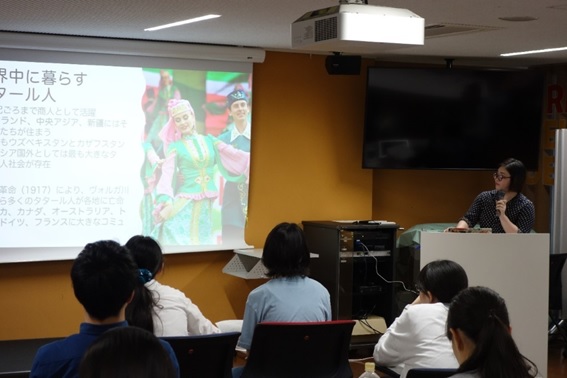