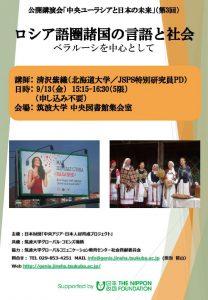 On September 13, 2019, as part of a series of lectures called “The future of Central Asia and Japan ”, Dr. Shiori Kiyosawa, JSPS Research Fellow (PD) of Slavic-Eurasian Research Center of Hokkaido University, who specializes in language policy of East Slavic countries, was invited to the University of Tsukuba with the lecture called “Language and Society of Russian speaking Countries – focus on Belarus”. The theme of the lecture was about the use and mixing of two closely related languages – Belarusian and Russian in Belarus and the complex situation of the divergence between the language that Belarusians recognize as their “mother tongue” and the language they actually use. An interesting example is the translation of Haruki Murakami’s work into Russian when the Russian translator used a Belarusian-Russian mixed speech in an attempt to convey the Kansai dialect which drew criticism from Belarusian because these two languages, with extremely similar structure, are perceived one as a “standard language” and the other as its “dialect”, which creates some tension. This interesting example was presented in an easy-to-understand manner to the Japanese, and more than 20 attendees were listening with great interest. 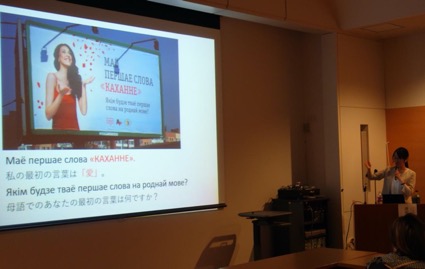