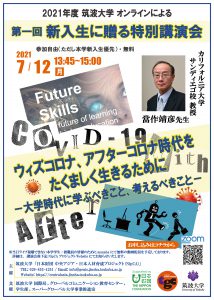 On Monday, July 12, 2021, the University of Tsukuba held its first online special lecture for freshmen. This time, Professor YasuHiko Tohsaku from the University of California, San Diego, was invited to give a talk entitled “To Live Strongly in the With Corona/Post-Corona Era: What You Should Learn and Think about in Your College Years.”
Professor Tohsaku is the director of the Japanese Language Program at the University of California, San Diego, and the head of the Foreign Language Program at the Pacific Rim School of International Relations. He specializes in language acquisition theory and foreign language pedagogy. In this lecture, Professor Tohsaku explained the era we live in, using the term “disruptive creation” as a keyword. In particular, he emphasized what role universities should play in such an era and what skills people need to survive.
The generation born between 1997 and 2015, which includes most new students, is known as Generation Z (Gen Z), and is said to be the most diverse human generation to date. As AI technology develops and takes over human jobs, people will have to take on various new positions and form a number of new careers. They will also be required to adapt to the newly created values quickly.
What is the university’s role in such a current of the times? Professor Tohsaku pointed out that the role of universities in a society where existing values will soon lose their meaning goes beyond simply providing knowledge. It extends to creating resources for the design of new things and people and nurturing human resources who can survive in the chaotic future. In addition to this, he talked about the skills to be developed at university to succeed in the future. This process is based on lifelong learning and human power, backed by exploring, thinking, and communicating. These abilities include creativity, empathy, and self-reflection as the way to survive in the chaotic society of the future.
During the Q&A session, the students asked questions unique to the “Gen Z”, such as sharing their experiences and asking for advice on starting a business. Professor Tohsaku provided them with essential guidelines for living in the future society. We would like to express our gratitude to Professor Tohsaku for his kindness in answering the students’ questions until late at night, even though it was late in the evening local time.
This lecture was available on the Manaba platform from July 12, 2021, to July 25, 2021. 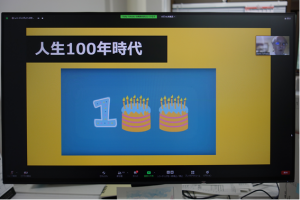