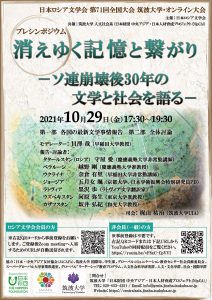 The first part of the symposium, moderated by the NipCA project coordinator UIA Yuji Kajiyama, featured presentations on the latest literary developments since the collapse of the Soviet Union in the seven countries and regions that were part of the former USSR: Tatarstan (Russia), Belarus, Ukraine, Georgia, Latvia, Uzbekistan, and Kazakhstan. Speakers and presented countries/regions are listed below:

In addition, each of these locations has a different attitude toward and involvement with the current Russian Federation, which had the central position of the former Soviet Union. There were presentations on the values inherited from the Soviet era and newly cultivated values in the 30 years since the collapse of the Soviet Union. For instance, the power relationship between ethnic languages and Russian in literature, the definition of each ethnic literature, and the view of one’s own country and Russia as the subject of literature.
The second part of the session was a plenary discussion moderated by Professor Kaizawa of Waseda University. Professor Kaizawa began the discussion by asking whether literature has the social function of historicizing the trauma of past memories. He raised various questions, such as whether literature still retains such social power amid the rise of new cultures as media and pop culture and whether a new form of literature can be created by joining hands with such cultures. In response to Professor Kaizawa’s question, we asked whether literature still holds such social power, whether new forms of literature are being created by working with such cultures, and the situation in each country and region regarding freedom of speech. In response to these questions, the speakers continued to talk about the latest literary developments, ranging from traditional oral literature to examples of media mixing of literary works in film and television.
The entire pre-symposium was an event of an unprecedented scale. It depicted connections with the Soviet era, what has disappeared, and what has been newly born from the standpoint of seven countries and regions of the former Soviet Union.
This symposium was streamed on the YouTube channel of the Japan Association for the Study of Russian Language and Literature. It has 1102 views as of November 30, 2021. 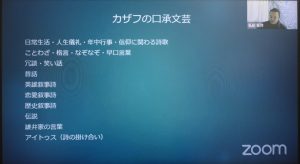 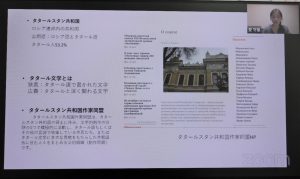