Japan is one of the most developed and richest countries, which is the third economy in the world. However, in the last 20 years, there has been slow growth in the economic process. North part of Japan – Hokkaido also experiences specific challenges in population and employment rate. Difficulties give the Hokkaido government incentive to enhance the economic status of the town. In the seminar conducted in Hokkaido Government Office by Mr. Araki and Ms. Sato, we recognized thought-provoking information regarding the increasing number of foreign workers and the food industry in Hokkaido.

Since 1920, the population in Japan started shrinking and the problem was more visible in Hokkaido – Japan’s largest prefecture. Hokkaido represents over 20% of the country’s territory, but only 4% of its population, which makes Hokkaido the least densely populated among Japan’s 47 prefectures. According to the latest population projections, Hokkaido’s population decreased from 5.5 million in 2010 to 4.2 million in 2040. Moreover, the population will have reduced by 2.4 million in 2060, which will lead to 1.8 million people. In addition, having 56% of the total population only 45% will have been the total labor force in 2060.
Mr. Araki also mentioned that the problem of the declining population created another issue – the lack of workers in Hokkaido. The case of Hokkaido requires special attention as the situation with jobs changed extremely fast. There is a job-to-applicant ratio, which means the number of applicants applying for a position to the number of people hired for that position. For instance, based on this ratio, there were 41 000 jobs on 121, 000 applicants in 2009. Year by year, the number of workplaces have been increased and reached almost 95,000 in 2018, while the number of applicants was 80,000.

The second part of the lecture was devoted to the topic “Food Industry in Hokkaido” presented by Masayo Sato – Chief Coordinator of the Food Industry Promotion Division Department of Economic Affairs. It was useful to know the role of Hokkaido in the Food industry for the Japanese government and the challenges that the city is faced in this sphere. The interesting point is that Hokkaido takes first place in Japan by agriculture, fisheries yield, and self-sufficiency rate (Food).

Due to this lecture, I had a chance to gain a better understanding of the important points of the primary sector and its influence on the economy through this meeting. For example, Masayo Sato mentioned that the ratio of added-value food products is considered low in Hokkaido (28%) compared to Japan’s average ratio (34.3%). It occurs because there is a huge volume of primary sector in Hokkaido and it can be fixed through developing product development. Masayo Sato shared with us the mission, which the Food Industry Promotion Division follows to grow the economy and support the growth of the food manufacturing industry.  This mission includes two objectives:

The last part of the lecture opened me to a new direction as “Adventure Travel” (AT).  Adventure Travel constitutes a form of travel that allows us to enjoy interactive contact with local people through activities in nature and cross-cultural experiences, and to change our inner self as we learn more about the nature and culture of the area. Hokkaido has the full potential to develop this sphere as a town that has a wealth of abundant AT resources such as unique nature and culture.  In addition, AT has a great impact on Hokkaido’s economy, which interfere with the largest job creation compared to overnight travel or cruise travel.

In summary, we enjoyed an extremely informative lecture by Mr. Araki and Ms. Sato that without any doubt broaden our horizons in the economic sphere through the Hokkaido case. For me personally, this meeting showed how developed country acts to build sustainable economy using a variety of progressive strategies. I believe that this knowledge will help me to understand the economic processes of my country – Uzbekistan. 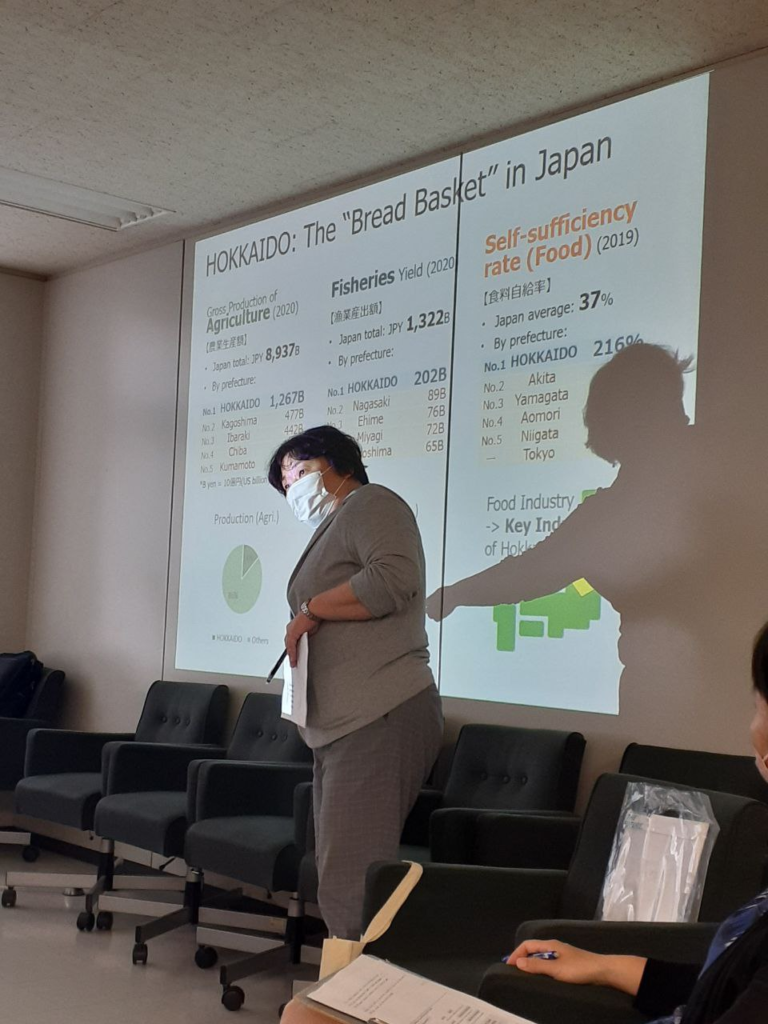