The 5th Special Lecture and Discussion “The Road to Digital Transformation to Change Society” was held on Thursday, October 27th, 2022. The guest speaker, Professor Mamoru Taniguchi from the Faculty of Engineering, Information and Systems of the Tsukuba University, gave a lecture titled “Diversifying Smart Cities and Their Challenges.” 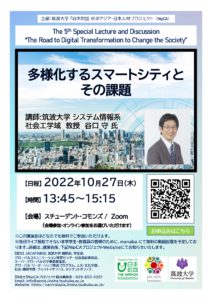 During the lecture, he talked about the concept of the “Smart City” which is often set as a goal of current urban development, as well as the issues and problems the concept faces.

During the lecture, Mr. Tanguchi talked about Masdar City in the United Arab Emirates (UAE), which is known as the world’s best “Smart City” as it emits no carbon dioxide and uses renewable energy. However, even though this city of 50,000 people emits virtually no carbon dioxide, rapidly developing areas such as Dubai and Abu Dhabi, that have a population of more than 1 million people, still emit a huge amount of carbon dioxide. In this way, using actual examples, Mr. Taniguchi explained that the primary goal of the “Smart City” concept, which is to reduce carbon dioxide, may not be fully achieved.

With the advancement of IT, the hurdles in obtaining information have become easier to overcome. Under these circumstances, the special service that provides the best combination of various transportation services for individuals, called Maas (Mobility as a Service), has become increasingly popular. In the past, individuals had to make separate arrangements for each transportation system, but the new Internet services make it possible to combine various transportation and payment systems into one. Mr. Taniguchi gave a more detailed explanation of the MaaS, explaining how it makes traveling easier and more convenient.

To sum up, Dr. Taniguchi gave us the important lecture about the feasibility of incorporating energy issues and the introduction of IT into urban development and about the negative aspects of such innovations, which we have to be aware of.

This lecture was the first hybrid (face-to-face and online) event for the NipCA project. The Q&A session was lively ensued. The guest speaker received many questions on digital technologies and their usage, problems on revitalization of the declining cities and the transportation problems that emerged as a result of promoting urban development. 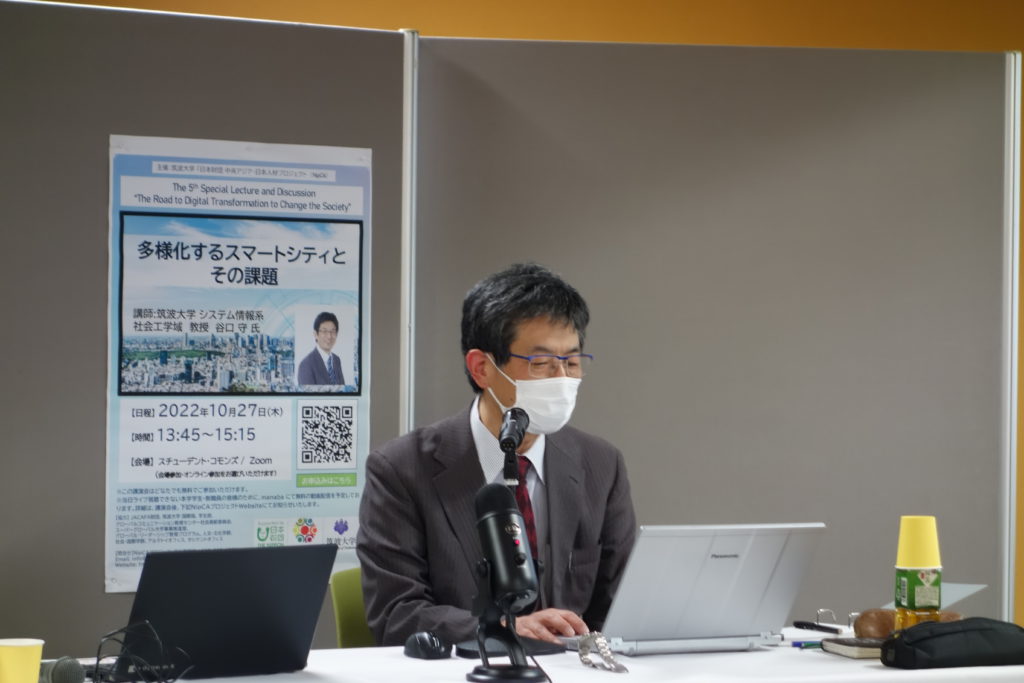