The 14th International Conference entitled “Mutual Understanding of Different Cultures, Ethnicity, Language through the Prism of Comparative Typological Studies” was held on March 4-5, 2022. This event is a part of the “Crossroads of Civilizations” conference series, jointly organized by Tashkent State University of Oriental Studies and the School of Humanities and Social Sciences of the University of Tsukuba. This year’s event had a hybrid format, providing opportunities for both in-person and remote participation via the Zoom platform. From the NipCA project, participants in the online form included:
Project administration director, Prof. USUYAMA Toshinobu
Project administration deputy director, Prof. ONO Masaki
International administrator and project coordinator, KAJIYAMA Yuji, Ph.D.
Researcher, SOIPOV Jasur, Ph.D.

At the beginning of the first day of the conference, OMONOV Kudrat Sharipovich, vice-rector of the Tashkent State University of Oriental Studies, NAGATA Kyosuke, president of the University of Tsukuba, and ABDURAKHMONOV Mukhsinkhuja, H.E., Ambassador of the Republic of Uzbekistan to Japan made the opening address and welcome speeches. All speakers expressed high expectations of this international conference and noted its essential role in developing further research.

Prof. ONO Masaki and HIGURE Yasuharu, a first-year Ph.D. student in the International and Advanced Japanese Studies Program at the Graduate Student of Business Sciences, Humanities and Social Sciences of the University of Tsukuba, presented their research on “Developing “Nihongo Avenue”: a database-type online learning platform for learning conversational Japanese for beginners.” The presentation introduced a language learning platform called “Nihongo Avenue,” new material for learning Japanese amid the pandemic that limited previously available opportunities for studying abroad and exchange. “Nihongo Avenue” offers three language options such as Japanese, English, and Uzbek languages and can be installed on smartphones and computers. The platform is currently in the process of data collection. It will include a model sentence posting function and a quiz function in the future. The first phase of this platform will be launched in April 2022.

In the same section of the conference, Prof. USUYAMA Toshinobu and a fourth-year student at the College of Humanities, School of Humanities and Culture of the University of Tsukuba KOYAMA Shogo gave a presentation entitled “On the types of accentuation in short forms of adjectives in modern Russian language.” At the beginning of the presentation, prof. USUYAMA Toshinobu emphasized that this research was the topic of KOYAMA Shogo’s thesis. The decision to present it at the conference was made based on the outstanding results of this work. KOYAMA Shogo presented his research on the accusative case of adjectives in Russian using Russian-Japanese dictionaries and corpora. This research focused on determining whether two previous studies found out the words corresponding to a certain typology and provided reliable data on the frequency of occurrence of certain types.

On the second day of the conference, the researcher of the NipCA project, SOIPOV Jasur, Ph.D., made a presentation on “Brief Picture of Uzbek Students in Japan from 1994 to 2019.” This research analyzed the trends of Uzbek students studying in Japan during the past 30 years. The report showed that Uzbekistan has a low level of tertiary school enrollment within the country compared to other Central Asian countries. Given the shortage of places at domestic universities, Uzbek students are strongly oriented to study abroad. This trend is only increasing year by year. Compared to the number of Uzbek students in Russia, Kazakhstan, and South Korea, this figure in Japan is still insignificant. However, even with a comparatively small number of students from Uzbekistan in Japan, an extensive analysis of the data revealed a rapid growth trend in the number of Uzbek Students in Japan over the past 30 years. The presented analysis drew the special attention of the conference participants from Uzbekistan to this issue.

In the final section of the second day of the conference, the international coordinator of the NipCA project KAJIYAMA Yuji, Ph.D., delivered a presentation on “The Relationship of Japan and Central Asia in the History of Cinema.” In his talk, Dr. Kajiyama analyzed the images of Japanese people in Soviet and Central Asian cinema. He discussed the representation of Japanese songs and Japanese film productions while highlighting the recent organization of co-productions between Japan and Central Asia. The Japanese who appeared in films during the Khrushchev Thaw period as tourists were often portrayed as Japanese soldiers or Japanese prisoners of war, which was common for Central Asian countries. This tradition persisted in many subsequent joint Japanese-Soviet films. A recent film by a Japanese film director KUROSAWA Kiyoshi, To the Ends of the Earth (2019), showed that the actual exchange between the two countries goes through such details as portraying the landscape of Uzbekistan, a tourism-oriented country, from a perspective far from exoticism.

This international conference, which took place over two days, was an excellent opportunity to deepen our understanding of culture, ethnicity, and language through presentations on various topics. This year all the participants from Japan were able to participate in the conference only remotely. Still, majority of the speakers indicated that they would like to present in person. Organizers and attendees also expressed hopes for attracting more participants next year and organizing future events in an in-person format as the new type of coronavirus vaccine advances. RIKHSIEVA Gulchehra, a rector of the Tashkent State University of Oriental Studies, Candidate of Philological Sciences, concluded the conference by thanking participants for fruitful presentations and expressed hope for further active cooperation between Japan and Uzbekistan. 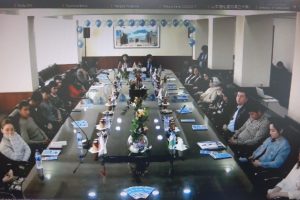 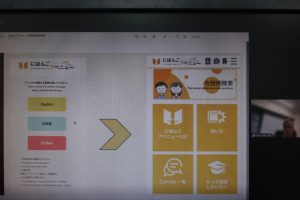 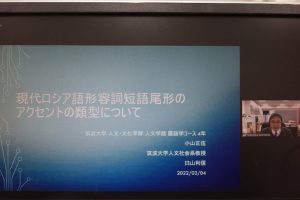 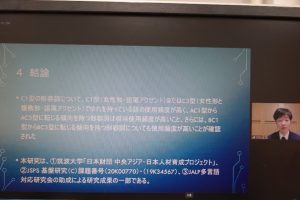